This article is about damage in Space combat. For damage in Ground combat, see Damage type (ground)

There are three major damage categories in Star Trek Online:

Damage in Star Trek Online exists in multiple, overlapping categories. The first distinction is the source of the damage:

Damage resistance ratings against a specific type will always reduce damage from that type, regardless of whether the source of that damage is a directed energy weapon, an ability, or even an exotic damage ability.

As a large example, "Plasma" damage can refer to:

Console descriptions and tooltips must be read carefully to determine which categories of damage they affect.

Each different energy damage type has a bonus effect, known as a proc. Most weapons come with one of these bonuses, while some rarer weapons may contain multiple, or a special one replacing the standard proc.

Direct energy s, such as Beams and Cannons, use Energy Damage. Deployable Ship Devices such as Satellite Turrets also deal Energy Damage based on the type of weapon it carries.

There are tactical advantages to using a single energy damage type primarily due to consoles giving a greater bonus by energy type (e.g. phasers) than by weapon type (e.g. beam arrays). However, some players prefer to use a wide variety of damage types in the hopes of scoring multiple proc hits. 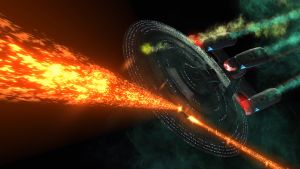 Phaser damage is displayed as orange in color, or sometimes pale yellow. The Andorian and TOS retro versions are a blue color. The term "phaser" is an acronym for Phased Energy Rectification. A type of particle weapon, phasers damage targets with streams of nadions. Against living targets, this can be to either lethal or non-lethal effect, depending on the power of the stream. Player-acquired starships for the Federation by default come with Phaser energy weapons. 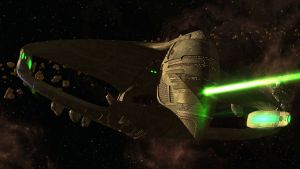 Disruptors are a type of directed energy used in weapons, and are green or dark green in color. Disruptors cause damage to the target by breaking the bonds of atoms. Player-acquired starships for the Klingon Defense Force by default come with Disruptor energy weapons. 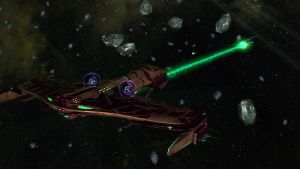 Plasma energy beams are green/cyan in color. Player-acquired starships for the Romulan Republic by default come with Plasma energy weapons. 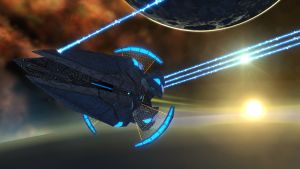 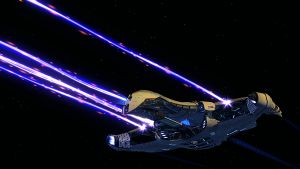 Polaron are pink/purple in color. These weapons were heavily utilized by the Jem'Hadar during the Dominion War. Some Jem'Hadar Polaron ground weaponry can have bonus effects based on the Nanoenergy cell used. 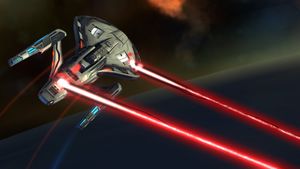 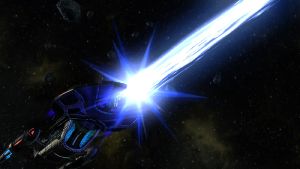 Protons, are whitish-blue in color. This rare and experimental weapon type fires a concentrated stream of proton particles at its target dealing moderate damage over time. This weapon is equally effective against starship shields and hull. Should a Proton Weapon land a critical hit, it has a 50/50 chance of dealing additional proton damage that completely bypasses the target's shields.

Lastly, these abilities deal Proton damage that scales with your Auxiliary Power, but isn't classified as weapon or exotic damage:

Finally, damage reflected by the Shield Reflection skill is dealt as Proton damage, though it cannot be boosted by any means. It is simply 20% of the reflected critical hit's damage. 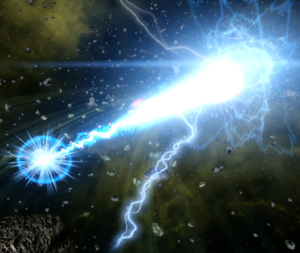 Some weapons and abilities fire a stream of electricity at their target. There is not yet a consistent proc associated with Electrical damage, and indeed, the majority of it is dealt as Electrical-based Exotic Damage. 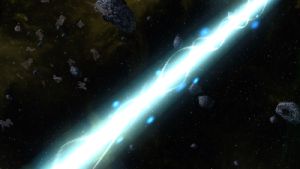 FeedbackPulse is an ability that is used to reflect Incoming damage. Below are various forms of Feedback abilities; they deal the same type of damage they are reflecting:

Ship Shields may come with one or more damage resistance modifiers, each giving 20% resistance against the damage type indicated by the suffix(es) in the item name: [Pha], [Dis], [Pla], [Pol], [Tet], [Ap].

3 types of Armor Consoles provide resistance against all, or a specific subset of Energy Damage:

There are also specialty Engineering consoles, such as Energy Signature Dampeners which provide the same effect, but at a smaller magnitude.

The various Factions deal damage types specific to them both in space and ground combat. Since defensive equipment may provide resistance against only a subset of all damage types, knowing in advance what damage to expect from a given foe and using the right equipment to counter it can increase the chances of survival.

Kinetic damage is dealt by explosive devices of various kinds, including torpedoes launched from Torpedo Launchers and deployable Torpedo Platforms, and Mines deployed from Mine Launchers, as well as various spatial anomalies caused by certain abilities. In addition to the Kinetic Damage, projectile weapons often have secondary effects, in some cases dealing additional Energy Damage or Exotic Damage to the target in a single hit or as a DoT or AoE.

There are currently two ways to boost Kinetic damage directly, which would apply to all Kinetic Damage projectiles as well as any Kinetic Exotic Damage: 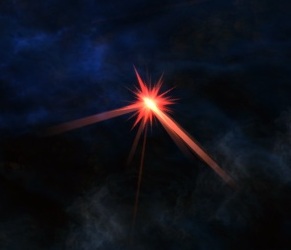 There are several types of Torpedoes, which may vary in damage potential, flight speed, launch time, applicable modifiers and additional effects over the base Kinetic Damage, but regardless of type, all of them deal Kinetic Damage.

All the torpedo types below deal Kinetic damage, so refer to the above section on how to protect your ship against that. Otherwise, one must keep in mind the different attributes the torpedoes have:

Mines are stationary, proximity activated target tracking explosive devices delivering Kinetic Damage to the target, and depending on type applying other harmful effects. The main difference between Mines and Torpedoes is that while Torpedoes actively pursue the designated target from the moment of launch, Mines sit still until a hostile ship comes within 4km proximity, then they pursue the target and detonate on impact.

Mines come in the same types as Torpedoes, with the same effects in addition to the Kinetic Damage they all deal.

The following damage types are not considered Energy or belong to any other category. They may act as Exotic damage depending on the source of the damage.

Previously only available in ground combat, there are now two sources of Fire damage in space:

Aside from that, one must rely on All Damage boosts to increase your fire damage in space.

Another damage type previously only available in ground combat, the

Trait: Out of Time is an Starship Trait that deals Cold damage to self in space. There are no ways to boost Cold damage in space directly; one must rely on All Damage boosts.

Yet another damage type previously only available in ground combat, Psionic damage can now be dealt by

Rebounding Resonant Frequencies. This is a damage reflection ability, so the damage cannot be boosted or critically hit, but it nevertheless deals Psionic damage to the enemy.

In space, much like Plasma and Proton damage, Radiation comes in both Exotic and non-Exotic types. Only Exotic Radiation is boosted by Exotic Particle Generators. Specific Radiation Damage resistance in space can be found on:

Non-Exotic Radiation damage is boosted by the

A specialty "catch all" term used to describe damage caused by certain non-weapon (i.e not caused by Beams, Cannons, Torpedoes or Mines) consoles/abilities or damage-causing Science bridge officer abilities. These are abilities boosted by Exotic Particle Generator skill, and their potency affected by the ship's Auxiliary power level. A common feature of Exotic damage is (though not always) 50% - 100% shield penetrating Kinetic Damage. However, this form of non-weapon damage can be seen in Electrical as well as Physical and Proton damage in space.

In space, the Kar'Fi Battleships of the Fek'Ihri Horde launch Tortured Souls that do Physical damage, the Crystalline Entity spawns fragments which do Physical damage, and The Sphere Builders utilize Temporal abilities dealing Physical damage, making these the exceptions to the "only in ground combat" norm for this type of damage from NPCs. Most forms of Physical Damage are Shield Ignoring

Player-usable sources of Physical Damage in space combat are:

Note: Damage dealt by any kind of explosion is Kinetic Damage and thus reduced by Kinetic Resistance, and NOT by Physical Resistance.

A few abilities are classified as "Plasma-based Exotic Damage", and boosted by both Exotic Particle Generators and Plasma-Generating Threat-Scaling Science Consoles. They include:

In space, Proton exotic damage is boosted by the Exotic Particle Generator skill instead of weapon skills as usual, and is still also boosted by things that specifically boost Proton damage. As Proton is a form of Energy damage, it will also be boosted by and resisted by All Energy Damage [resistance] sources. There are currently three sources of exotic Proton damage: