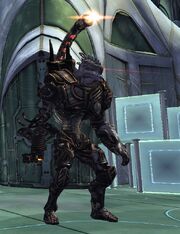 These Tyrant Lizards have been modified extremely by the Collective: Nearly the entire body is coverd with Body Armor and implants. The right arm has been replaced by a versatile mechanical tool/weapon, body mass around around the lower spine removed. Most notably, the grey-skinned creature is fitted with a backpack that has a tail-like sting attached. It is curving over the top of the Gorn's head and emits a bright orange light.

Assimilated Gorn appear in the Borg Invasion of Defera Event: