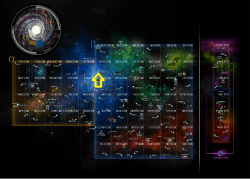 The Eirhess System is a system located in the Teneebia Sector of the Beta Quadrant.

Romulan refugees flooded into the agricultural colonies on Eirhess III after the destruction of their homeworld. The Eirhess colonists, many of whom had relatives on worlds that were ceded to the Cardassian Union in the late 2360s, welcomed them with open arms.

The neutral planet is now a base for humanitarian and relief efforts in Romulan space, and both Starfleet and the Romulan Star Empire may have a presence in the system at any given time.