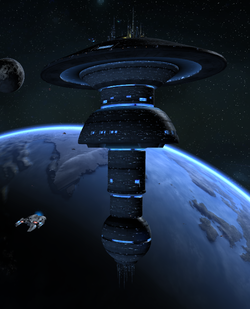 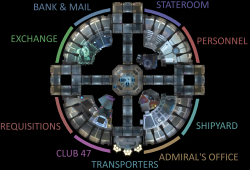 Earth Spacedock is a facility orbiting Earth in the Sol System, and serves as the main hub for all Federation players. Although Earth spacedock was constructed sometime prior to 2285, its nine accessible main sections are outfitted with state-of-the-art technology.

With the release of Season 9, this old map was replaced with a newly designed Earth Spacedock.

This is the room you are first in when you beam down to Earth Spacedock. You can beam down to Starfleet Academy from there.

At the Admiral's Office, players can talk to Admiral Quinn and get information on what to do once they're commanding their first vessel.

At the Shipyard, players can talk to select and customize their starship, and a turbolift to Starship Requistions allows new ships to be obtained.

A room accessible only from the Shipyard, Ship Requisitions is where you can requisition weapons, consoles, and equipment for your starship. 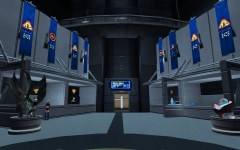 Class of 2409 graduates are ready to serve

In this section of Spacedock, players can requisition bridge officers and start and manage their own fleets. Through the door is the sickbay. 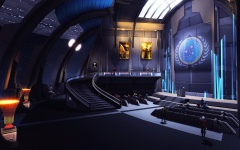 Stateroom for promotions and lectures

This is the conference hall where several nameless NPCs brag about random players and watch on as an officer speaks about advances in astrophysics.

In the center of Spacedock is an Ops-like control center where the main crew works.

Here players will find the bank, their fleet bank, and the Exchange, where players purchase and sell items with other players. Next to the bank consoles there are Mail consoles which allow to send items to other characters.

This is where players may purchase personal kits and equipment, as well as alter their appearance and costume, for a price. 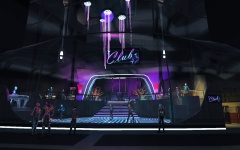 This is a bar and lounge where players can pick up or just meet others and talk. They can also trade with Pag, a Ferengi dealer who stands at the back of the room.