Spacejump to navigation point up to 45 meters away

The Environmental Suit is a body armor which allows you to survive in extremely hostile environments such as the vacuum of space or extremely hot or cold worlds. 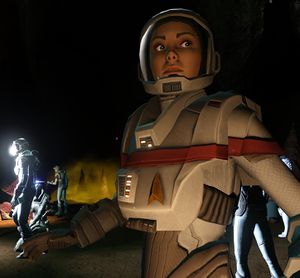 Many missions require EV suits to progress. They often provide a basic one for free.

Additionally, all missions requiring a [Rebreather Device] can be done with an EV suit.

The standard environmental suit gives the user resistance to Radiation, Toxic, Fire and Cold damage, collectively referred to as "Environmental Damage" in the game. All Uncommon and higher EV suits also give Physical and Kinetic Damage Resistance Rating of the same magnitude. The amount given scales with Mark level, and is given by the number B in the modifier table below.

Like armor, Uncommon, Rare, Very Rare, Ultra Rare, and Epic Environmental Suits gain additional modifiers. Only one of each may appear at a time. Below is a list of EV suit modifiers.

An environmental suit allows a wearer to survive in hostile environments, such as space or extremely hot or cold climates.

Allows you to lock on to a navigation source (such as a magnetized hardpoint) and use suit thrusters to jump to that target. Suit must be active.

There are several different variants of the EV Suit available:

Despite the description saying the difference is cosmetic, the higher quality environmental suits above have higher stats.

Available from Nukara Strikeforce reputation system. These EV suits may be upgraded.