Subcommander Kaol explains the main goal in the Solanae Dyson Sphere during a cutscene after player's first visit.

Welcome to the Solanae Dyson Sphere. My name is Subcommander Kaol.


This is the main command for the Joint Alliance Command, a multi-species task force willing to work together toward a common goal. For now, at least. The gateway you used to get here is in Republic space, so the Republic is taking the lead here as well.

Our mission: to destroy Omega particles this sphere creates, and neutralize its ability to generate more. The first scouts into the Sphere confirmed that it was producing massive amounts of Omega particles for an unknown purpose. Given enough time, this sphere could produce enough Omega particles to completely annihilate warp travel in all known quadrants of the galaxy.

We thought this would be a sweep and clear operation, but we were waylaid by the species known as the Voth. The Voth claim to be the natives of the Delta Quadrant, are extremely technologically advanced, and want the sphere. Now we're in a fight for control. The Voth are determined to gather Omega particles. We're still determining why, but this is a threat to all warp-capable civilizations. I can't stress how important it is we stop the Voth and neutralize the Omega particles.


There's a lot to do. Shall we get started?

Subcommander Kaol informs the player about various areas of the Allied Zone during a cutscene after player's first visit.

We run missions here from Joint Command, the center of all Allied operations.
This is the supply depot. We use it to ship supplies to our forces and to store any unusual or dangerous technologies we find here.
This region is the minefield. It is used as a barrier to keep Voth forces out, although some still slip by.
And this is the Ion Stream, a series of structures moving a high volume of charged particles and exotic radiation through the area. 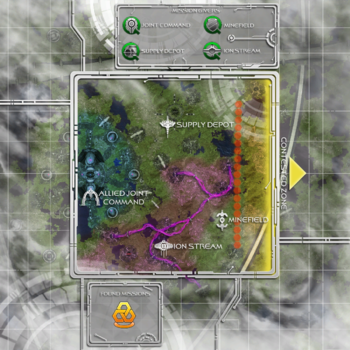 Subcommander Kaol informs the player about the situation in the Contested Zone during a cutscene after player's first visit.

This is the Contested Zone. Our forces here are in constant conflict with the Voth.
There are five fronts in the zone, and each one of them needs your help. Here we are fighting the Voth for the control over towers that are critical to our control of the zone. I would advise you help if you have other starships to provide support.
In the center of the Contested Zone is the Battlezone. Commander Arnold is leading the ground fight there against the Voth. He needs anyone who's willing to assist.
Make no mistake about this: the Contested Zone is an active conflict. Be careful out there. 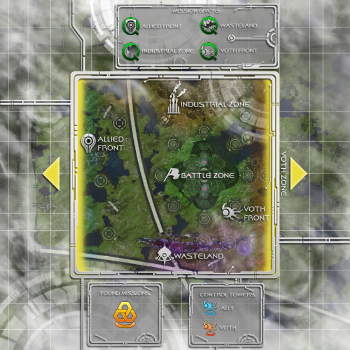 Vice Admiral Chal Rexx explains the main goal in the Undine Battlezone during a cutscene after player's first visit.

Captain, you are in the Undine Battlezone.
Our goal is to close fluidic rifts to destroy Undine planet killers. Here is our plan. This is the map of the battlezone. We have three different methods of closing the rifts. When a rift is open, the area is red. When we close a rift, it will change to blue. Closing rifts advances our progress, shown by this meter. When it is full, we can launch our attack on the planet killers. We must defeat at least one planet killer for the operation to be considered a success.
Good luck. 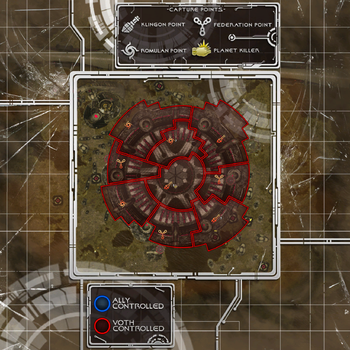 Available to players once they reach Level 50, the Undine Battlezone is divided into nine areas; in each area, players must work to close a rift to Fluidic space. Efforts in the Battlezone are coordinated by the U.S.S. Cheron.

Once all nine points have been captured, three Undine Planet Killers appear on the map.

If the players are able to defeat all three Planet Killers within 10 minutes, a Voth fleet arrives to attempt to retake the zone. Players have 5 minutes to defeat as many Voth as possible before they retreat.

For each captured point, the highest reward players can receive is: 10

Based on how many planet killers are defeated, completing the Battlezone will reward the following:

Numerous accolades can be obtained in Solanae Dyson Sphere: