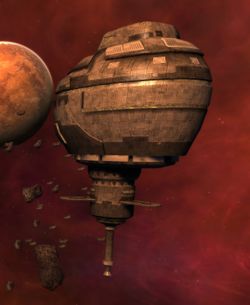 Donia Space Station is a starbase located in the Risa Sector. The planet in vicinity was the Donian homeworld but has been evacuated by the Federation due to ecological breakdown. Donia Station was built by the Donians, the native species of the system.

Donia Space Station looks unlike any other Starfleet starbase, suggesting that is was built by the indigenous population of Donia System. The station consists of three distinguished sections, with the bulbous command module obviously serving as center of operations with crew quarters. Three panels are connected with the tubular middle section above the thin albeit long strut that forms the lowest part of Donia Station.