From Star Trek Online Wiki
Jump to: navigation, search
Dominion Transponder
Epic Inventory
Character Bind On Pickup
Activate to open the Gamma Recruit User Interface. This will be used to track your progress through the Gamma Recruit system.

(This device cannot be sold or discarded).
Values do not reflect skills or other modifiers
Value: 0

“Turn the Tide” during the event. All characters receiving this item are known as Gamma Recruits. The item is used to open the Gamma Recruit User Interface, and provides access to its associated rewards. 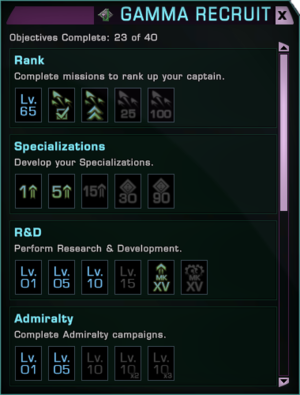 An encrypted device given to all Gamma Recruits. It allows you to communicate covertly with your special handler, and provides the means to call for support after you complete specific assignments.

Activating this device will open the Gamma Recruit User Interface. This window will display a list of tasks and goals that you will be directed to complete. Each time a task is completed, you will be granted the opportunity to claim a reward from this interface.

Completing various tasks may also grant Account-Wide rewards. Any such rewards can be claimed by visiting

Commander Q'on in First City, or

Subcommander Kail at the Romulan Flotilla. Once unlocked, each Account-Wide reward can be claimed a single time by each character on your account.

(This device cannot be discarded or sold. If ever lost, visit agents mentioned above to claim another.)