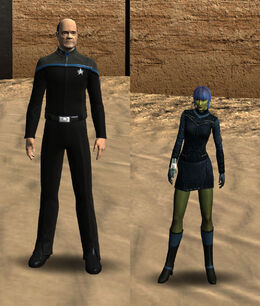 The Doctor (Bridge Officer) is a Promotional Bridge Officer available to anyone who attended the 2015 Star Trek Las Vegas Convention and received a voucher that year. It was also available through special promotions.

It was added to the Phoenix Prize Pack as a character unlock on October 3, 2019. It can also be purchased from the Zen Store as an account-unlock for 4,000

under the name Procured EMH Bridge Officer as part of "Mudd's Market", though it periodically goes on massive discounts (upwards of 85% during special promotional sales).

Both versions of the EMH Bridge Officer are customizable, however the Starfleet variant has limited body and face options due to featuring the likeness of Robert Picardo. The Klingon version comes with the default appearance of an Orion female, and can be fully customized.