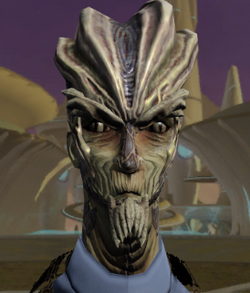 The Dinasians were a warp-capable humanoid race from the Dinasia System who maintained relations with the Iconian civilization approximately 200,000 years ago. They were extinct by the 24th Century, but Federation scientists studied their language, identifying it to be similar to that of the Iconians, Iccobar, and Dewans.

The Dinasians deeply desired access to Iconian biomedical technology, but the Iconians feared that they might damage themselves or others with the technology. While they send aid and supplies to assist the Dinasians, the Iconians refused to give them access to their knowledge, even when a plague broke out on the Dinasian homeworld. Desperate to get their hands on the technology, the Dinasians joined an alliance of envious races such as the Iccobar in an invasion of the Iconian empire, hoping to get their hands on the central archive called World Heart. Although Iconia was destroyed, they failed to find the Heart. ( “Midnight”)