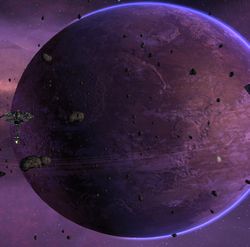 Dimorus II is the site of the Romulan] space station S'harien Station, where the Romulan military conducts experiments with Borg technology under the directive of Commander T'Vrea. The planet is orbited by an unnamed natural satellite and an asteroid field. In addition, a ring consisting of small particles surrounds the planet.

Vulcan legends also say that during the Sundering, a sword created by the great Vulcan weaponssmith S'harien was lost on Dimorus II during a battle between two noble houses. The winners of that battle went on to be the first rulers of Romulus.