Due to ongoing PvE queue and reward balance changes in Delta Rising, some dilithium reward amounts listed below may be incorrect.[1][2]

In Star Trek Online, Dilithium is a major form of currency predominantly earned and used in the end game. Players can use dilithium to purchase various things ranging from new ships when the player reaches a new rank to new officers, equipment (Space and ground), upgrading or re-engineering equipment, and via crafting materials.

Each character has a 10 million

These rewards can be claimed once per character:

All STFs and event-type missions accessible form the PvE queue grant a set amount of dilithium upon completion according to their difficulty level:

for ground maps. [3] There is also a daily mission for a random fleet action rewarding 960

Foundry has been shut down in April 2019.

Authors of user-generated missions can also be donated 25, 50 or 100

(refined!) by any player who completes their missions.

on critical success) and a few provide larger quantities.

, respectively. There are also special projects which grant more dilithium:

Continued support projects are more profitable than exchanging marks via "Ongoing Efforts" Projects in the long term as they offer a better mark to dilithium ratio (~1:23 vs 1:10) but need to be reslotted and filled once per hour for maximum efficiency. 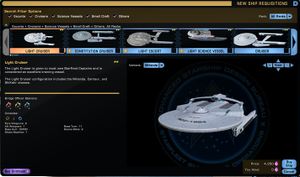 Ship and Shuttle Requisitions NPCs, also known as Ship Vendors, can be found at the shipyard section of the following locations:

Delta Quadrant: All of the following locations may be accessed via the Iconian gateway in the Jouret System, Azure Sector, Beta Quadrant.

Lt. Ferra at Starfleet Academy and Lt. S'stas at Klingon Academy are selling Duty Officers of Uncommon and higher quality for Dilithium.

For Season 5, players had many currencies converted to dilithium (at the following rates, up to the first 160,000 dilithium)[6]:

Q: What are “Fleet-Only Dilithium” and “Reputation-Only Dilithium”?
A: These are special Vouchers that fulfill the same purpose as existing Dilithium, but can only be used to fulfill Project requirements for the respective features, either Fleets or Reputations. These Dilithium Vouchers does not need to be refined, and cannot be traded for Zen. Projects that require Dilithium will deduct from the appropriate Voucher pool before deducting from your Refined Dilithium.