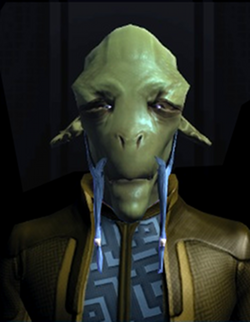 In Star Trek Online the Dia'fene are a species primarily located in star clusters near Romulan space, such as the Eridan Belt, the Khazan Cluster, and the Afehirr Nebula.

The Dia'fene are humanoid with facial features such as the nose and mouth resembling Saurians. Their ears, however, are longer and droop downward. Their skin tones range from green to purple. Although the Dia'fene are bald atop their heads, they often grow facial hair.

The Dia'fene have had a history of strong differences in their internal politics. At one point these differences escalated to armed conflict, when the Remans supplied weapons to Dia'fene rebels in an attempt to start a civil war.

With the aid of Weather Control Systems the Dia'fene have been able to colonize planets with relatively harsh climates. In some cases they have settled as far as 3 kilometers underground.