This page may require cleanup to meet STOWiki's quality standards. Please help improve this page if you can. The talk page may contain suggestions.
Device - Transphasic Torpedo Platform
Rare Ship Device
Consumed On Use
Values do not reflect skills or other modifiers

Device - Transphasic Torpedo Platform is a rare consumable deployable ship device that is obtained through Duty Officer Assignments. using this device deploys a level X+1 torpedo platform that will remain in a fixed position for 300 seconds and target nearby hostiles with transphasic torpedoes fire.

If another player, level 50 will try to sell/trade Platforms level 51, to a player level 35, then the 35 level will see that item as 36 level.The item auto - Scales the level. 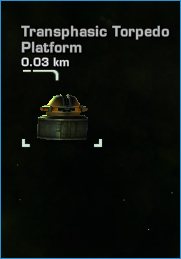 Device - Transphasic Torpedo Platform can be obtained only from :

to receive a stack with 10 pieces/charges in Success or 20 in Critical Success.
This item cannot be purchased from a npc vendor .
Can be traded,mailed, sold, or bought from the Exchange system.

A small but useful fire support . 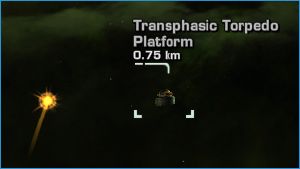 This deployable device (consumable item) it is flagged as Borg and has a Frigate rank of a Borg ship.It is equiped with a Transphasic Torpedo launcher and will make Kinetic Damage to the selected target on impact.The color of launched device (projectile) is yellow.The damage , like any other torpedoes (kinetic damage) can be improved with

The Platform it is only for Space combat .
After the related assignments is finished, this rewarded device will auto-equip on Device Slots on your ship and a new skill icon will be created on your ship space skills interface.

The device has no shields and for a level 51 item, a Hull with 3721 HP.
Once you have deployed (clicked on the icon skill) the Device - Transphasic Torpedo Platform in space, the Platform will stay on that location and start to hit the hostile enemies if are within 10km agro/fire range.

If you have more than 1 Deployable Devices types (satellites or platforms) or items in a stack , note that you can launch only 1.So you can't use a phaser satellite with an additional plasma or tetryon satellite or with a Photon Torpedo Platform.
Does not share same cooldown with

The cooldown to launch a new platform is 300 seconds (5 min.).
Even if the platform was destroyed in the first seconds, the timer will keep counting down until 0.If the device was not destroyed ,after 5 minutes it will vanish.When the cooldown is over then you can launch a new device.

See the Tips - Satellites and Torpedo Platforms for tips and more details.

The Device - Transpasic Torpedo Platform is no longer bind-on-equip for the Klingons.