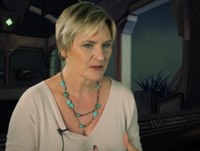 Denise Crosby during a promotional interview for Star Trek Online

Denise Crosby is an American actress best known for portraying Tasha Yar and her daughter Sela in Star Trek: The Next Generation, two roles she has reprised in Star Trek Online.

Denise Crosby was born on November 24, 1957. Crosby has appeared in numerous television and film roles since the 1980s. In 1987 Crosby was cast as Natasha Yar on Star Trek: The Next Generation, a role she played during the series' first season. After her character's death, Crosby returned to The Next Generation multiple times, reprising her role of Yar as well as portraying the villainous character of Sela.

Despite her early departure from The Next Generation, Crosby has retained many ties to the Star Trek franchise, notably voicing her characters for multiple video games and producing the documentaries Trekkies and Trekkies 2.

In recent years, Crosby has appeared on Showtime's Ray Donovan and AMC's The Walking Dead.

Denise Crosby has appeared in Star Trek Online since January 2013, when she portrayed Tasha Yar in the anniversary episode “Temporal Ambassador”. In May 2013 Crosby returned for the expansion Legacy of Romulus, portraying Romulan Empress Sela. In 2014 an 2015 Crosby continued to portray Sela in several missions, some of them revamped from the original Romulan story arc for Federation characters. In 2017 Crosby returned for the mission “Survivor”, in which both Sela and Yar appear for the first time together, offering a preliminary conclusion to the story arcs of both characters.

Listed in order of release.