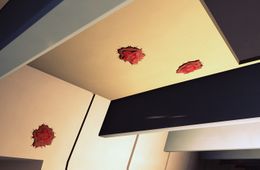 Denevan Neural Parasites are a dangerous form of life which attaches itself to a host, usually on the back, to inflict pain or drive them to attack those not infected in order to weaken them. They conceal themselves on walls in dark corners due to their aversion to certain UV spectrum.

"They are a lifeform that propagates by infiltrating the nervous system of a host creature. Through this neural link, they can compel their host to obey their bidding. They can also inflict extreme pain upon the host at will, and do so to discourage attempts at resistance. While effective, this punishment can lead to permanent neurological damage or death." - T'Ket

They were first identified by Starfleet after they decimated a Federation colony in the Deneva System. They drove most of the population mad and violent, but recordings from the colonists indicated a possible solution to the U.S.S. Enterprise; exposure to ultra-violate rays. Ultraviolate satellites were deployed in orbit to rid the planet of the infestation.

Deep Space K-13 and starships nearby were infected again a few years later. Commander Scott, who was on the Enterprise during the initial incident, was aided by a vessel sent by Admiral Garrett in using UV lighting to eliminate the infestation again. It was however revealed that the Na'kuhl were planning to use the parasites for their own agenda.