The logo of Delta Rising

Delta Rising is the 2nd expansion of Star Trek Online, focusing on the Delta Quadrant. It was released on October 14, 2014. 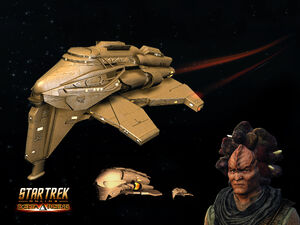 The Kazon are one of the many returning species

Story content of Delta Rising takes place in the Delta Quadrant, exploring the effects of the journey of U.S.S. Voyager through the region more than 30 years earlier.[1]

The expansion only explores a small part of the Quadrant, namely the region Voyager explored after it crossed the Nekrit Expanse. Featured races include Talaxians, Ocampa, Kazon, Benthan, Hierarchy, Malon, Hazari, Octanti, Kobali, and Automated Personnel Units. Notably the besieged homeworld of the Kobali will be an adventure zone[2] while another featured world harbors a "dark secret".[3] The new area is covered by the Vyntadi Sector Block and Tekara Sector Block, with the Dyson Sphere gateway in the former. 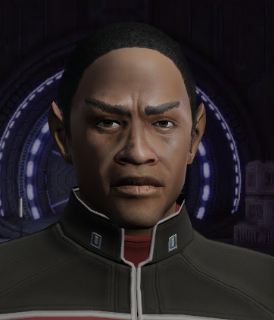 Tuvok will be joined by 4 other Voyager crew members

Tim Russ will reprise his role as Admiral Tuvok and will be joined by Garrett Wang as Harry Kim, commanding officer of the U.S.S. Rhode Island,[4] Robert Picardo as The Doctor, Jeri Ryan as Seven of Nine and Ethan Phillips as Neelix.[5] Kim Rhodes also returned as Jhet'leya during the 5 Year Anniversary Event. 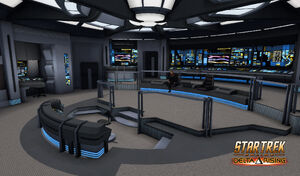 U.S.S. Voyager and other Intrepid class ships got an extensive visual overhaul. In addition, a complete interior based on Voyager has been slated for release, both for use in missions and as a ship interior for players. It includes Astrometrics and two variants of the Mess Hall (either with replicators or a kitchen).

The level-cap was increased from level 50 to level 60 (as Fleet Admiral for UFP/RR and Dahar Master for KDF), the first such increase in over four years.[6] The increase includes new Mk XIII and Mk XIV gear[7], new skill specialization, and Tier 6 star ships. 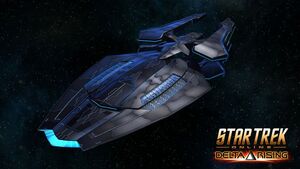 9 new Tier 6 ships will be available

Existing Tier 5 ships are upgradable via a 700 zen fee for one upgrade or 2000 zen for a pack of 4 upgrades, to a Tier 5-U ship that provides increased stats, but not the special abilities and intelligence officer seat provided by Tier 6 ships. Very rare ships from Lock Boxes, duty officer survivor packs, the Lobi store or event ships can be upgraded to Tier 5U free of charge. The only tier 5 ships ineligible for upgrade will be free ships, Mirror ships, ships bought with pure Fleet Credits and ships earned through missions.[9]

A new type of Bridge Officer: Intelligence Officer[10] is introduced as a specialization - distinct from "profession" (Engineering, Science and Tactical). Intel officers will also have a conventional profession and retain such skills and traits in addition to their new intelligence abilities. Their space intelligence skills can only be used in Tier 6 ships that have a hybrid slot for intelligence officers. Ground abilities can be used in the normal way. New intelligence gear will also be introduced which at least includes a grappling hook, allowing players to climb or abseil. 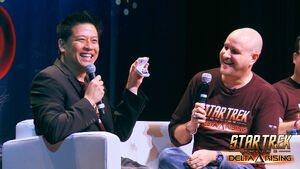 Delta Rising was officially announced at the dev panel of the official Star Trek convention in Las Vegas on August 02, 2014. The announcement included information about the updated U.S.S. Voyager ship model and interior, the level-cap increase and tier 6 ships, the expansion's location and involved races, as well as the involvement of Garrett Wang.[3]