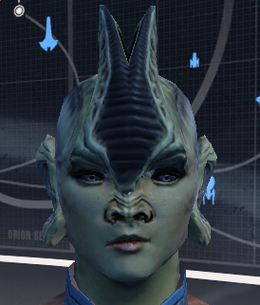 Deferi Ambassador is an official position in Deferi society. Ambassadors are responsible for maintaining relations with other political entities, such as the Federation and the Klingon Empire.

A Deferi Ambassador can be found near the right side turbolift that leads to Admiral Quinn's office at Earth Spacedock. He begs you to aid his people.

The ambassador is located in the council chambers of the Great Hall of Qo'noS in First City, speaking with Ambassador S'taass.