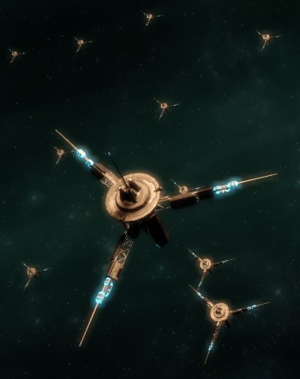 The Olt System Defense Satellites are unmanned weapons platforms guarding the Penal Moon of the Ennis and Nol-Ennis. They prevent any escape from the moon and attack any unidentified ship approaching it. In the 24th century, they were capable of taking out a Runabout in a single shot, and were upgraded before 2410 with armaments capable of taking on modern Alliance warships. They are however capable of being distracted by probes and hacked.