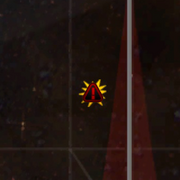 A Deep Space Encounter node as it appears in sector space

Deep Space Encounters are nodes appearing at random intervals and at random locations in sector space. They appear for 5 minutes and give access to an otherwise empty space map containing six groups of a randomly selected enemy (either pre-existing and/or successively warping in). On the sector space map, they are indicated as red exclamation marks and can be automatically navigated to the same way as to any location.

Any given Deep Space Encounter may be entered by up to five players. Combat levels of both players and enemies are set to the same level, depending on the quadrant in which the encounter takes place (Beta = 30, Alpha = 50, Delta = 60). Upon completion of the encounter, each participating player is rewarded with dilithium

and an R&D Material Package.

If a group of players performs exceptionally well in defeating the enemy groups in a Deep Space Encounter, it may trigger an escalation in which several waves of ships, including numerous Dreadnought-class vessels to engage the player.

Deep Space Encounters are named according to the enemy type they contain: