Damage during ground combat in Star Trek Online can be divided into several different categories:

In addition to those two categories above, damage can also be placed into these other categories, which overlap with the ones above:

There are six primary Energy Damage types, each having a bonus effect, known as a Proc. Most weapons come with one of these bonuses, while some rarer weapons may contain multiple.

Most body armor also provide overall energy damage resistance, though Environmental Suits generally do not, in addition to Kinetic and Physical damage resistance. Energy Dampening Armor provides the highest base energy resistance, with Polyalloy Weave Armor second. Any other item that states it has "All Energy Damage resistance" in its description will do the same.

Note: The Threat Control Commander rank skill provided resistance against Energy Damage, but has since been removed from the game with the skill revamp.

Phaser damage is displayed as orange in color, or sometimes pale yellow. Andorian and 23rd century Federation phasers are a blue or sometimes pink in color. The term "phaser" is an acronym for Phased Energy Rectification. A type of particle weapon, phasers damage targets with streams of nadion particles, the same underlying technology as disruptor weaponry. Against living targets, this can be to either lethal or non-lethal effect, depending on the power of the stream. Federation bridge officers by default are equipped with phaser pistols.

Kit frames with the [+Pha] mod increase Phaser weapon damage by 20%. Shields and armor with the [Pha] suffix modifier take 20% less Phaser damage than usual. [PhaDis] can be found on Armor only and provides resistance to both Phaser and Disruptor damage. Diburnium Reinforced Body Armor is another choice. 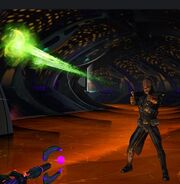 Disruptors are a type of directed energy used in weapons, and are green or dark green in color. Disruptors cause damage to the target by breaking the bonds of atoms. Klingon Defense Force bridge officers by default are equipped with Disruptor pistols.

Kit frames with the {+Dis] mod increase Disruptor weapon damage by 20%. Shields and armor with the [Dis] suffix modifier take 20% less Disruptor damage than usual. [PhaDis] can be found on Armor only and provides resistance to both Phaser and Disruptor damage. Diburnium Reinforced Body Armor is another choice.

Kit frames with the {+Pla] mod increase Plasma weapon damage by 20%. Shields and armor with the [Pla] suffix modifier take 20% less Plasma damage than usual. [PlaTet] can be found on Armor only and provides resistance to both Plasma and Tetryon damage. Exo-Plating Armor is another option.

Kit frames with the {+Tet] mod increase Tetyon weapon damage by 20%. Shields and armor with the [Tet] suffix modifier take 20% less Tetryon damage than usual. [PlaTet] can be found on Armor only and provides resistance to both Plasma and Tetryon damage. Photonic lifeforms are more susceptible to Tetryon damage. Other sources of Tetryon damage on the ground:

Polaron are pink/purple/magenta in color. These weapons were heavily utilized by the Jem'Hadar and Breen during the Dominion War. Some Jem'Hadar Polaron ground weaponry can have bonus effects based on the Nanoenergy cell used.

Kit frames with the {+Pol] mod increase Polaron weapon damage by 20%. Shields and armor with the [Pol] suffix modifier take 20% less Polaron damage than usual. [PolAp] can be found on Armor only and provides resistance to both Polaron and Antiproton damage. 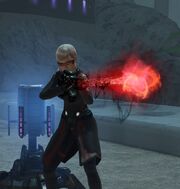 Protons, are whitish-blue in color. It is rare and experimental, used by very few weapons, primarily utilizing reverse-engineered Voth technology. Should a Proton Weapon land a critical hit, it has a high chance of dealing additional proton damage that completely bypasses the target's shields.

Players standing within the range of a [Triolic Pattern Enhancer] or using an [Ophidian Cane] (or both) will take increased Proton damage.

The various Factions deal damage types specific to them in ground combat. Since defensive equipment may provide resistance against only a subset of all damage types, knowing in advance what damage to expect from a given foe and using the right equipment to counter it can increase the chances of survival.

Kinetic damage is dealt by explosive devices of various kinds. In addition to the Kinetic Damage, these weapons often have secondary effects, in some cases dealing additional Energy Damage or Exotic Damage to the target in a single hit or as a DoT or AoE.

On the ground, Kinetic Damage is dealt by Mines, Bombs and Mortar type turrets deployable by the use of Kits, and Grenades thrown by using Kits or abilities. The TR-116A and TR-116B rifles also deal kinetic damage.

Note: Melee attacks such as martial arts or with the Bat'leth do NOT count as Kinetic damage. Instead, this is Physical damage.

There are four basic types of Grenade--Photon, Plasma, Smoke and Stun--though Smoke grenades do not cause kinetic damage. There are also other types of grenade which are specially obtained. It is important to note that shields drastically reduce the damage of grenades.

The following grenades do not actually cause any damage, and so are outside the scope of this article:

Similar to grenades, mines are placed by Engineering or Intel officers on the ground and only detonate either when an enemy walks over them, or after a set amount of time.

Bombs act like mines, except they explode on your command, not due to proximity.

Physical damage is dealt by unarmed martial arts attacks, melee weapons, or using a ranged weapon's "bash" melee attack to shove away enemies in close proximity. The majority of sources of non-weapon Physical damage have 100% shield penetration. Physical, like Kinetic, is damage the Borg cannot adapt to.

Other sources of Physical damage:

Physical damage on the ground can be boosted by the two-piece set bonus from set Terran Task Force Special Ops set. Except the Energy Dampening type, all other Body Armor types provide varying levels of resistance against Physical Damage. Note: Damage dealt by any kind of explosion is Kinetic Damage and thus reduced by Kinetic Resistance, and NOT by Physical Resistance.

Sources of Cold damage on the ground available to the player:

Cold damage can be resisted by:

Fires on the ground can sometimes cause fire damage if walked into, depending on the map. Fire damage sources available to the player:

Note that Plasma fires do not necessarily deal Fire damage, but rather energy, kinetic, or kit damage depending on the source.

Radiation damage can be dealt by weapons with the [DoT1], [DoT2], and [DoT3] modifiers, as well as these sources:

Bluegills and Hortas deal this type of damage. Bluegill Ravagers use an Acid Spew toxic hazard, and both Ravagers and Pestilants use Acid Spit for direct toxic damage (not Acid damage; see below). Hortas use a Corrosive Acid ability that also does toxic damage. The Fek'Ihri can also deal this type of damage during ground combat. You may also encounter Toxic damage as an environmental hazard on certain missions, such as the Neurocine Gas during the mission “Hearts and Minds”. Modified Regalian Fleaspiders during the same mission also deal Toxic damage with a Ravishing Toxic Spit attack, as do the Orithian Creepers during the mission “Alpha”.

Toxic damage sources available to the player include:

These less common damage types may be inflicted with Special Ground Weapons and kit modules, including explosives or other abilities.

Sources of Electrical damage on the ground include:

Devidian, Lethean, Reman and Undine foes can deal this type of damage. Psionic damage attacks are known to ignore personal shielding and deal direct damage to a player's health, but notably do not affect non-biological targets such as turrets. Psionic damage can be dealt by: