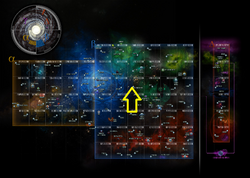 The Daise System is a system located in the Rator Sector of the Beta Quadrant.

An uninhabited Class K world orbited by a small moon is the primary feature of this system. Single-cell organisms were detected on this world in 2378, ending plans to terraform the planet for colonization.

Raiders have been known to use the remote system as a base of operations for attacks on Romulan convoys, but an increased military presence in the area has put a stop to all but the most determined of pirates.