Deep Space 9 (abbreviated to DS9) is a Federation space station located in the Bajor Sector. By virtue of being sited at the mouth of the Bajoran wormhole, DS9 has become one of the most strategically important space stations in the Alpha Quadrant as well as being a hub for diplomacy and commerce.

Due to this importance, it remained open to members of the Klingon Defense Forces during the Federation-Klingon War and functions as a hub for Jem'Hadar from Odo's expeditionary fleet.

The commander of the station, and of the U.S.S. Defiant which has been assigned to DS9 since 2371, is Captain James Kurland.

A space station originally built by the Cardassian occupation forces in orbit of Bajor, DS9 was surrendered to Federation administration in 2369. It became one of the most important strategic posts in Starfleet after the discovery of the Bajoran wormhole, and the station was moved to the mouth of the wormhole itself.

DS9 was key to the defense of the Alpha Quadrant during the Dominion War, and its commander, Benjamin Sisko, laid the groundwork that led to Bajor joining the Federation. 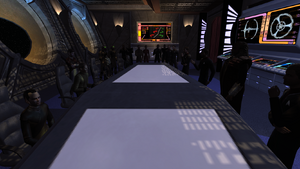 Deep Space Nine was built in 2351 as a mining station, serving Cardassian forces during the Occupation of Bajor. The station's original designation is Terok Nor.

In 2369 Starfleet takes control of the station at the request of the Bajoran provisional government. Following the discovery of the Bajoran wormhole the station is moved from its original position in Bajor's orbit and becomes one of the most important commerce facilities in the entire Alpha Quadrant. It is also the starting point for any ship exploring the Gamma Quadrant.

After hostile confrontations lead to all-out war, Deep Space Nine is at the center stage of the First Dominion War from 2373 to 2375. The station's crew, including commanding officer Benjamin Sisko, take part in many pivotal battles of the war.

Following the Dominion War, Deep Space Nine remains an important hub for trade, commerce, diplomacy and military operations. While True Way forces attempt to destabilize the region by attacking the station numerous times, DS9 is mostly recognized as the base of operation for joint Starfleet-Klingon anti-Borg operations.

As of 2410, Deep Space 9 is once again processing ore. However Bajorans refuse to work in ore processing due to memories of the occupation, so much of the work is conducted by refugees from the Gamma Quadrant. ( “Storm Clouds Gather”) 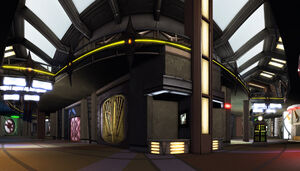 The pre-Victory is Life Promenade design

For more images on the early design of the station, click here.

When initially introduced, the scale of DS9's exterior was closer to canon, however it was considered too small by players and was increased in size to better allow ships to fly through it. Also, the space around DS9 was a diffuse brown nebula. This was changed with the release Featured Series The 2800 to more closely resemble the purple Denorios belt seen in the series. The release of The 2800 also granted Klingon-faction players access to the station for the first time.

Victory is Life saw a total overhaul of the design of the Promenade, Ops and the exterior of the station to bring it closer to canon and increase the overall quality and feel of the design. Developers pored through shots from the entire series to faithfully recreate the design, and matched the old plans of the promenade to the size of the still-used Paramount studio. The sections of the promenade not built by the studio used elements inspired from various changes in the set design over the years. The size of the station exterior was not changed at that time, as it would require resizing on all maps that use DS9, and the usage of interior maps on combat ground missions was also not changed as it was difficult to arrange combat in the now much smaller interior.

The station's Chief Engineer was previously mentioned as Commander Maxwell, with another engineer being Lieutenant Meyer. However both these NPCs were in missions that have since been removed from the game ( “Shutdown” and “Crack in the Mirror” respectively) 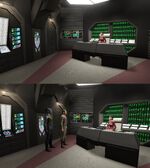 A comparison of the security office sans Odo, and with Odo and Dukan'Rex. Both versions appear on the same map.

Deep Space 9's social map consists of the Promenade and Ops. Certain elements and NPCs appear only to characters who have completed specific missions in the Gamma Quadrant mission arc.

An example of this is the Dominion Embassy with Loriss. For players who have not reached “Scylla and Charybdis” this room will simply show a pile of crates, even as players who have completed Scylla and Charybdis interact with NPCs beside them. All NPCs in the list below who are subject to phasing have "(phased)" after them. Details on when these NPCs appear will be shown on their wiki page.

The Ward Room is not currently available on the social map, and is only accessible on certain missions. Missions set on Deep Space 9 which were released prior to the release of Victory is Life use the old Promenade and Ops map described in the "Design History" section above. 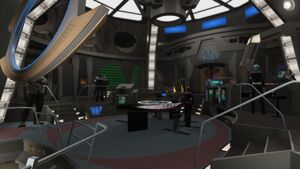 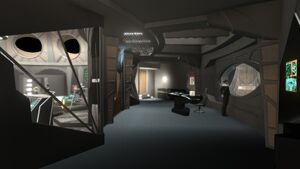 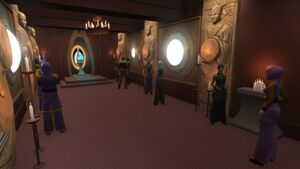 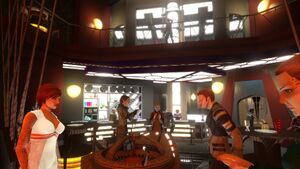 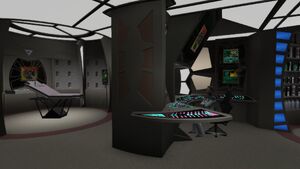 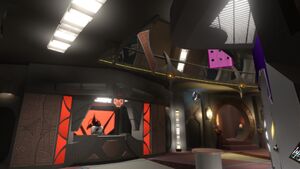 The Bajoran Temple and Klingon Deli 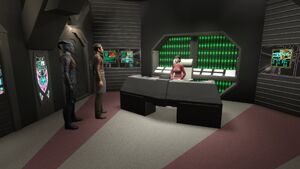 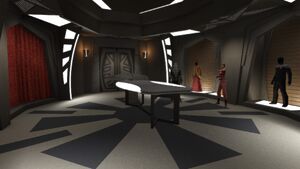 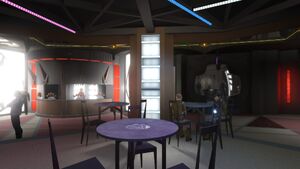 The replimat, Dominion Embassy and the Jumja stand 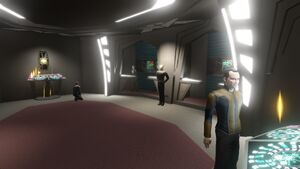 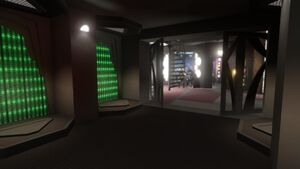 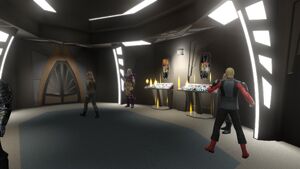 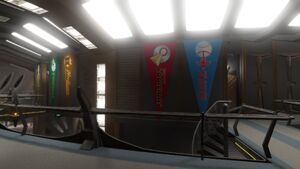 The Promenade is the main center of activity for the station. Stationed at intervals around the circumference of the promenade are docking rings entries for returning to your ship, turbolifts to the upper level and mail stations. There are also pennants for various baseball teams from across the galaxy, recognizing DS9's association with the sport. 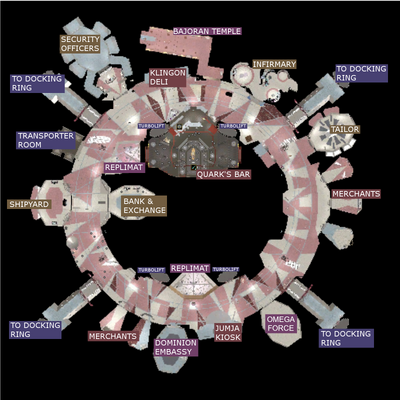 Quarks also has a Dabo wheel and a dart board.

Transporter Room (beaming to and from your ship) 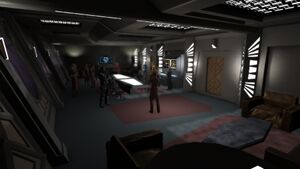 The Ward Room is not part of the standard social map and can only be visited during specific missions, notably; 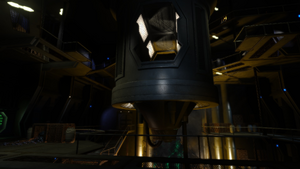 In “Storm Clouds Gather”, the player visits Ore Processing in one of the pylons and defends it against the Hur'q. Currently it is the only other location visited in game.

However, in now-removed missions it was possible to visit the docking ring ( “Crack in the Mirror”) and the station reactor ( “Shutdown”).

On the hull of DS9 during the mission “Boldly They Rode” 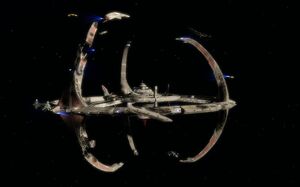 Other removed Cardassian Struggle missions began from NPCs on DS9, but did not involve it. 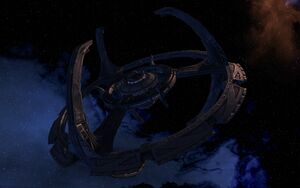 Empok Nor, as seen in the cut mission The Long Night