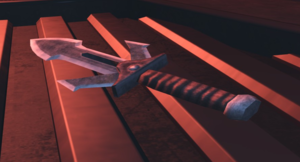 The d'k tahg is traditional Klingon knife used in combat and rituals. It has curved secondary blades stemming from the hilt that can be retracted.

Unlike the bat'leth and mek'leth, the d'k tahg is only available as a combat weapon to Klingon NPCs such as Warriors.

The d'k tahg is however a costume piece for Klingons and is used in the d'k_tahg emote.