You will receive the following reward:
Plus one of the following:
During the "Crystalline Cataclysm" Featured TFO: 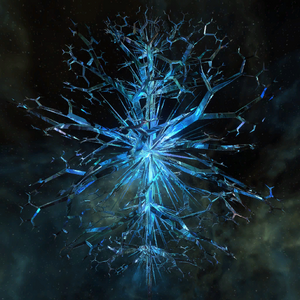 Crystalline Catastrophe is a PvE Queue event available for all factions in a normal and an advanced mode.

Admiral, a crystalline entity has been sighted. Join in the battle against this enormous destroyer of worlds!

Glad to have your assistance in these efforts, Admiral. I can give you information regarding the Crystalline Entity's combat capabilities and recommended countermeasures.

What is the situation?[edit | edit source]

We're under attack by a massive crystalline lifeform. The U.S.S. Enterprise encountered one of these nearly forty years ago, and the creature was destroyed. At the time, we believed that the creature was one of a kind and hadn't prepared for the eventuality of encountering another.

When this one was discovered traveling through this region of space, attempts at communication were made, but the creature responded by violently destroying the ships that were sent to make contact. As a result, Starfleet and the Klingon Defense Force have both authorized immediate action to end the threat caused by its presence.

The Tholians seem particularly interested in this Entity. Perhaps they hope to communicate with it, based on their biological similarities as crystal-based life-forms. As usual, the Tholians are enigmatic, and we're not really sure what they have planned. We should be prepared to defend ourselves from their forces, as we move to engage the Crystalline Entity.
During the special Crystalline Catastrophe event, you can earn Crystal Shards. These are used with the new Event Reputation to earn special bonus rewards. You may earn one shard every 20 hours for participating in the Crystalline Catastrophe queued event.

What do we know about the entity's combat capabilities?[edit | edit source]

It focuses a Matter Conversion Beam in a similar manner to starship weaponry, and uses this to lash out randomly at nearby vessels. This beam deals substantial damage to starships, it is capable of disabling and killing crew at an alarming rate.

The crystal regenerates at very high speeds, and is incredibly resilient to our fire power -- especially that derived from directed energy weapons. Massive amounts of sustained firepower will be needed over the course of our encounter in order to overcome this.

There is a high chance that dealing damage to the Entity will cause a Large Crystalline Fragment to break off into space. We've observed these Large Fragments seek out starships and ram into them, destroying them in as little as a single hit. If you find yourself being followed by a Large Fragment, it's recommended that you either destroy it, or outmaneuver it.

Large Fragments that impact a starship will shatter into Small Fragments which return to the entity and apply a "Re-Crystalize" effect that will amplify the magnitude of the entity's attacks. The Small Fragments can be destroyed, but targeting them has proven exceedingly difficult.

As a strange side effect of the Entity's unique crystalline structure, certain combat abilities that are typically used to drain enemy shields and subsystem power, have been proven to break down newly-formed crystals along the entity's surface. These abilities are specifically effective against Small Fragments that have attached to themselves to the entity and applied the "Re-Crystalize" effect.

Use of such abilities is recommended, in hopes of keeping the magnitude of the entity's devastating attacks in check.

The following abilities will periodically remove multiple "Re-Crystalize" charges from the Entity:

The entity is also capable of going into a sort of resonance trance. It is nearly immune to energy damage while in this state, and incoming weapons fire only seems to feed its rage. After it has concluded this trance state, any energy absorbed is violently expelled in a shockwave that can be extremely devastating.

It is recommended that our strike force switch targets during this phase to avoid feeding the shockwave, and resume fire on the Entity after it has expelled its shockwave. Allowing it to absorb too much incoming energy will allow its shockwave to potentially vaporize our entire fleet.

Do you have any load-out recommendations?[edit | edit source]

This is a creature we're dealing with, not a starship. Weapons and abilities which impact starship subsystems will generally have no effect on the entity, except where previously noted to remove Re-Crystalize buffs.

Abilities which can control the movement of Large or Small Fragments, or deal damage over a large area, could both come in handy to control the number of targets on the battlefield.

Maneuverability is also important to avoid collision with Large Fragments.

What are all of these strange energy readings?[edit | edit source]

As far as we can tell, the entity is throwing off a large amount of strange subspace distortion. As a result, we're seeing various spatial anomalies. Be careful -- as the entity changes energy states, it's likely that the anomalies will change as well.

Coming in first place results in the accolade Shattered and the following floor trophy: