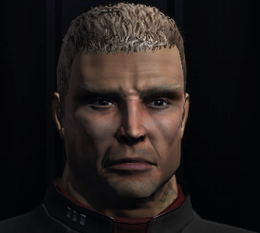 Commander Samuel Winters is a Human Starfleet officer and was the second in command of Earth Spacedock until 2409 when he received a new assignment. He reappeared in the Bajor System during the Dominion occupation of Deep Space 9. Following the destruction of U.S.S. Belfast, Captain Va'Kel Shon assumed command of U.S.S. Enterprise-F, with Winters as first officer.