No Win Scenario
Given by:
PvE Queue
Minimum Level:
50
Repeatable:
Yes
Released:
July 12, 2012
You will receive the following reward:

and required the players to accomplish "Combat Simulation 347" in which they had to protect a Civilian Transport for as long as possible.

Cryptic took down No Win Scenario January 29th, 2015. Official Response: "The No Win Scenario, both Starfleet and Klingon versions, has been removed from the PvE queue list. With the increase in maximum player level from 50 to 60, we no longer feel this queue is accomplishing its job of providing an intense escalating challenge where players really have to struggle to advance to the later waves. We do have plans to revisit this queue in the near future and rebuild it so it can continue to live up to its name." 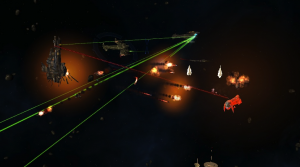 The team would had to defend a Civilian Transport from a randomly-selected enemy faction. There were ten waves, each containing more enemy units than the previous. The mission ended when either the transport was destroyed, or the team protected it long enough to defeat the tenth wave.

As the name suggested, the mission was designed to be practically impossible. The majority of players were not expected to get beyond wave four or five.

It's a battle for survival in this holodeck combat simulation. A transport is under attack. The enemies are relentless. How long can you survive?

Defend the civilian transport for as long as you can.

The enemy faction you will face is randomly determined by the game engine.

Unlocking the accolades for beating waves 8, 9, and 10 are broadcast to all players in Star Trek Online.

The Hall Of Fame contains a list of players who have beaten the No-Win Scenario plus links to first victories and speedruns.

If the fleet leaves the system prior to the next wave; there is no penalty assessed and the fleet marks are awarded as if the mission was completed. This was fixed with a March patch.