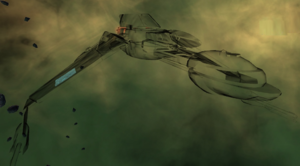 Cloaking technology is a form of stealth used most commonly by races such as the Klingons and Romulans for their starships. Similar technology can also be used on individuals, notably the Jem'Hadar.

While cloaking technology is on nearly all Klingon Empire and Romulan Republic ships, the Federation uses it sparingly; only a handful of Starfleet ships are capable of using a cloaking device, and none natively, outside of the Voth Phase Decoy Console.

Other NPC factions which use cloaks include the Romulan Star Empire, Reman Resistance, Voth, Borg Collective (alternate timeline only), and Rebel Klingons.

There are different types of cloaks in use on starships. Most notably the Cloak and Battle Cloak. Both of these conceal the player which can they lay an ambush and decloak at will with a damage bonus. However unlike the Cloak, the Battle Cloak can be triggered while at Red Alert. However, triggering the cloak in combat means dropping your shields while under fire, which makes your ship vulnerable.

In a further difference, the Enhanced Battle Cloak also allows the firing of torpedoes and deployment of mines while under cloak (however your ship becomes temporarily targetable while doing so). There are further variations on these, detailed below; 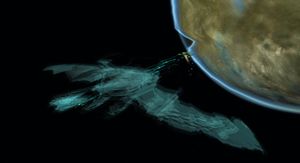 A Romulan Scimitar firing whilst cloaked

The Romulans have been one of the longest continual users of cloaking technology and believe most other powers stole the technology from them. ( “Butterfly”) All Romulan Warbirds are equipped with either a Romulan Cloak or a Romulan Battle Cloak which are more advanced than their standard counterparts. A handful of ships are alternatively equipped with an Enhanced Battle Cloak.

The Romulan console [Console - Universal - Cloaked Barrage] from the Scimitar Dreadnought Warbird (& usable on any Scimitar) enables the ship to fire all weapons while cloaked for a short period.

While the Klingon Empire had a type of cloaking device before the Federation discovered the Romulans had developed a device (Sarcophagus ship is listed under cross-faction below), cloaking devices did not become standard for the Klingon Defense Force until later. The vast majority of Klingon starships are equipped with either a basic Cloak, or a Battle Cloak. Ships such as the Vo'Quv Carrier are a very rare exception for the KDF. 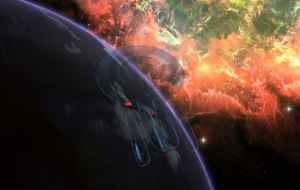 The Treaty of Algeron, signed in 2311 by the Romulan Star Empire and the United Federation of Planets, prohibited Federation cloaking devices. This agreement has been a source of controversy in Starfleet, where some officers believed it severely limited tactical options and put the Federation at a disadvantage. Although the Federation initially agreed to follow the treaty after the destruction of the Romulan homeworld, in early 2409 Starfleet was authorized to develop and implement cloaking technology on selected ships.

A Battle Cloak is also available from the Starfleet Assault Cruiser Technology Set 3 set bonus, available to the Intel Assault Cruiser. One of the three consoles of that set, [Console - Universal - Incremental Phase Cloaking Device], functions as a primitive cloaking device but with very different functionality to the normal devices mentioned above. Federation captains also have access to some cross-faction starships that have or can use cloaking devices (see comprehensive list below).

Quantum Singularity Manipulation is a form of cloaking available as an active reputation trait from the Romulan Reputation. It cloaks the player's ship, regardless of the ship or player faction, and allows the ship to continue firing without breaking the cloak. 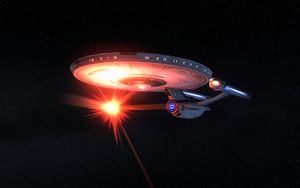 An Emission-Seeking Torpedo heading towards a cloaked ship

Efficiency of cloak's stealth is linked to auxiliary power level and cloaks can be penetrated through some perception abilities. The value of these abilities are primarily in PvP. In many PvE queues and missions an NPC cloaks for plot reasons and cannot be detected. Of note, abilities include;

Mines can sometimes be cloaked until activated. Examples of these include the those from the Tractor Beam Mine Launcher and the Subspace Anesthezine Mine.

Personal cloaking goes under a variety of names but is most frequently seen among NPCs as the Jem'Hadar Shroud. As a player ability is also termed a Stealth Module.