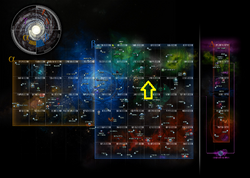 The Cirini Prime System is a system located in the Unroth Sector of the Beta Quadrant.

The population of Cirini Prime swelled to more than 4.7 million after the destruction of the Romulan homeworld. The Cirini Council is now one of the most influential groups in the new Romulan Star Empire, and the empress is scheduled to visit the world in the spring. Because of the increase in Cirini Prime's importance, the Romulan military has increased its presence on the planet.