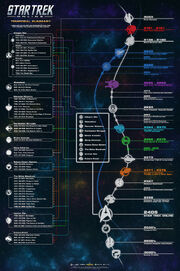 The Chronology gives an overview over historic events and the timeline of Star Trek Online.

Star Trek Online takes place in the Prime Timeline. This is the story continuity which includes the events of all the Star Trek television series and the first ten movies.

The biggest part of the game's story takes place in the early 25th century, roughly 30 years after the last on-screen appearance of the U.S.S. Enterprise-E in Star Trek: Nemesis and ten years after season 1 of Star Trek: Picard. Early missions for the Discovery and TOS Starfleet factions take place in the 23rd century, close to the setting of the respective series.

The events of the Kelvin Timeline (as depicted in the 2009 Star Trek film and its sequels) are generally part of a separate continuity, as they take place in an alternate universe. However, the destruction of Romulus in 2387 was first mentioned in these movies, and the setting is visited during the mission “Terminal Expanse”.