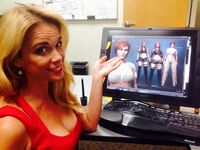 Chase Masterson with in-game models of Leeta in 2015

Chase Masterson is an American actress and singer known for portraying Leeta on Star Trek: Deep Space Nine, a role she has reprised in Star Trek Online.

Chase Masterson was born on February 26, 1963. After a role on General Hospital, Masterson made her first Star Trek appearance as Leeta in Season 3 of Star Trek: Deep Space Nine. Originally only scheduled for one episode, the character was later included in another episode of the Season and Masterson eventually appeared in 17 episodes of the series from 1995 to 1999. Besides appearances on television shows and films, Masterson has also retained her connection to the Star Trek franchise by appearing in the unofficial mini-series Star Trek: Of Gods and Men in 2008, alongside Tim Russ and Garrett Wang.

A frequent guest on Star Trek conventions, Chase Masterson founded a charity in 2013, which aims to bring attention to bullying and discrimination during convention panels. The charity, Pop Culture Hero Coalition, also cooperated with Star Trek Online in 2015, offering a special, donation-driven ship bundle to players.[1]

Chase Masterson has appeared in-game since July 2010 as a hologram of Leeta and returned to Star Trek: Online for additional voice-overs in 2015 asher mirror universe duplicate. In 2018, she finally reprised the role of the original Leeta.