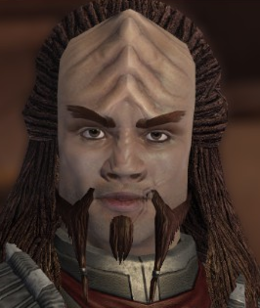 Ch'gren is a Klingon maintenance engineer who works at the Exchange in the First City. He is Lieutenant Doran's par'Mach'kai.

In the mission “The Renegade's Regret”, it is possible to see an unnamed Klingon NPC bearing a striking resemblance to Ch'gren walking on the Promenade outside the security office on Deep Space 9.