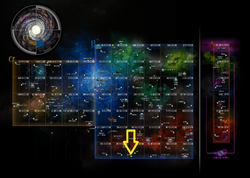 The Cestus System is a star system located in the Otha Sector of the Beta Quadrant. It is in Federation space near the border with the Gorn Hegemony and on the opposite side of the Federation relative to Deep Space 9.

The Gorn were alarmed by the establishment of a Federation colony in this system on Cestus III, as they regarded the system as part of their territory. Although they destroyed the settlement in the 23rd Century, the Federation had re-established a colony on Cestus III by the late 24th Century.