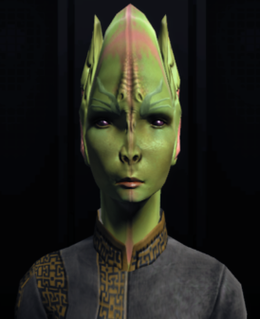 Celestara Mex is an acclaimed telepath, one the most powerful known to the Federation.

The player meets Celestara Mex in “A Light in the Dark”. She volunteers to "broadcast" the Federation's commitment to peace to the Undine. For that purpose, she travels aboard the S.S. Seleya to Fluidic Space using a quantum singularity as a gateway. The Undine however attack and board the Seleya, capturing Celestara and destroying the ship. She is held in an Undine Base, where she learns through her telepathic abilities, that the Undine have been responsible for the chaos in the Alpha and Beta Quadrants. Through infiltration they have played the major powers against each other in response to attacks on their territory, apparently by humanoids from our galaxy. However, Celestara also learns about an Iconian Gateway found by the Undine after an attack, also located on the base.