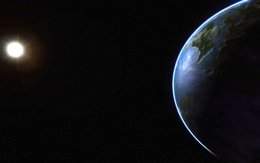 The Carraya System is a system located in the Azure Sector of the Beta Quadrant. Carraya IV hosts a secret Romulan prison for the survivors of the Khitomer Massacre. (Birthright, Parts I and II)

There are four planets in this system, including the M-class Carraya IV, which until the 2390s was home to several Romulan military installations and off-limits to all civilian traffic except authorized supply ships. Reports that there was once a prison camp on Carraya IV remain unconfirmed.

In 2404, the House of Martok used its considerable political pressure to block a proposed Klingon colony slated for Carraya IV. Since then, the planet has dropped off of Empire plans for expansion.