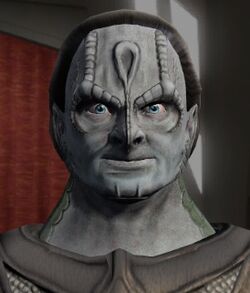 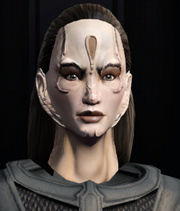 Cardassians are the dominant species of the Cardassian Union. Their home world is Cardassia in the Alpha Quadrant. After the Dominion War the Cardassians have struggled to reform their society.

Cardassians are a playable race in Star Trek Online for the 25th century Starfleet and KDF factions, however they must be unlocked from the Cryptic Store for 1000

Cardassians are gray skinned humanoids. They are easily identified by their unusually wide necks and a spoon-shaped bone on their foreheads. Cardassians favor heat and aridity, conditions also found on Cardassia.

In ancient history, the First Hebitian civilization on Cardassia was renowned for its art and beauty. It collapsed due to a lack of resources leading the surviving Cardassians to turn to the military and imperialistic expansion. Their occupation of Bajor saw Bajorans used as a slave caste as their world was stripped of resources to feed Cardassia.

Following the fall of the Obsidian Order (one half of the Cardassian government) in the 2370s, Cardassians established their first civilian government in centuries with the Detapa Council. However the Klingon Empire believed this government was infiltrated by Changelings and began an invasion of Cardassia.

Losing a war to the Klingons, the military re-took control and Cardassia joined the Dominion; who helped Cardassia rid itself of both the Klingons and the Maquis. However as the war turned for the worst, the Cardassians bore the brunt of the Dominion's war and eventually the two sides turned on one another. In the final days of the war, much of the Cardassian population was murdered.

The survivors chose to rebuild as a de-militarized, democratic power, supported by the Federation.

Cardassian society is extremely hierarchical and values family and loyalty to the government. Their culture and literature, of which was once held in the highest esteem, reflected this with novels such as "The Great Sacrifice" detailing a generational history of service to the state. For much of its life, the state represented a union of the military and secret service; these two ran a kafkaesque government where sentences are determined in advance of trials; with proceedings merely there to show the viewing Cardassians that justice is carried out. How Cardassian society has shifted in response to its trauma and post-war democratisation is as yet unclear.