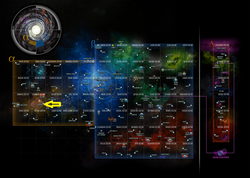 The home system of the Cardassians, the Cardassian system has eight planets and two asteroid belts orbiting a red dwarf star. Cardassia Prime is the homeworld, but five planets in the system are inhabited.

Cardassia Prime was devastated by orbital bombardments at the end of the Dominion War, and since then has been rebuilding with the help of the Federation and other friendly worlds.

A breakaway faction known as the True Way wants the Federation to withdraw from Cardassian space and is calling for the repeal of democratic reforms put in place since the end of the war.