Large and magnificent, Command starships are designed to act as mobile command centers. 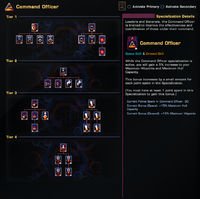 Leaders and Generals, the Command Officer is trained to improve the effectiveness and coordination of those under their command.

The Command Officer Specialization is a Primary Captain Specialization released with 5 Year Anniversary Event. It builds upon the concept of coordination and communication, both in space and on the ground. Players trained in this specialization will gain access to abilities that allow their entire teams to exceed previous limitations and perform more effectively as a unit.

While the Command Officer specialization is active, you will gain a 5% increase to Maximum Hitpoints and Maximum Hull Capacity.

Any Tactical, Engineering or Science Bridge Officer can be trained in Intelligence specialization by using the [Specialization Qualification - Command]. Said item is unlocked for crafting in the Officer Training R&D School once 10 points have been spent in Command Specialization, or may be purchased from the Exchange.

Command Officers represent leaders, tacticians and strategists – officers that take command of the battlefield and coordinate efforts to outmaneuver their enemies. They may also be called on to make difficult decisions in the heat of the moment, accepting the costs that come with waging war.

The following playable starships can be classified as Command Starships:

While active, you and your team mates will gain a substantial bonus to damage as well as a massive reduction in weapon power cost.

While active, you and your team mates will regenerate hull hit points very quickly and have their damage resistances increased substantially.

A large number of playable Tier 6 starships come with either an Ensign, Lieutenant or Lieutenant Commander Command BOff seating. However, these ships lack the built-in Inspiration abilities, and are thus not considered to be Command Starships.