Cannons have a firing arc of 180° and deal slightly more damage than Beam Arrays. 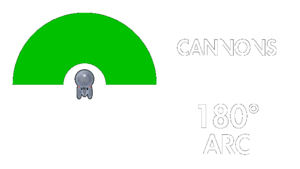 180° Weapon Arc for the Cannon

There are several types of Cannon available, each of which are listed below. Each type of Cannon offers a different proc (random chance for an attack bonus). The damage done by these weapons is modified by several Modifiers, Skills from the skill tables and certain Consoles. The baseline damage is dependent on the weapon's Mark level and its rarity.

For more information on the base damage done by Cannon weapons, see the respective weapon type articles.

Special Crafted Modifiers: These modifiers can appear once on crafted Cannon of Rare quality and higher:

All values given are for Common Cannon at 100 Weapon Power. There is greater damage with increasing rarity.