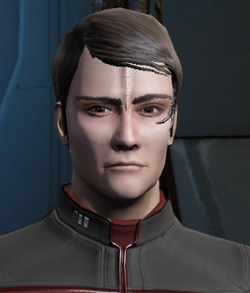 The Brunali are a humanoid species native to the Delta Quadrant.

With their homeworld being located close to a Borg transwarp conduit, frequent attacks by the Collective destroyed the Brunali civilization. Although being reduced to an agricultural culture, the Brunali were still skilled in genetics, however, and engineered a child named Icheb with anti-Borg pathogens, which is a similar approach to fight the Collective as that of the Octanti. Being sent out in a small ship, a passing Borg vessel assimilated Icheb, spreading the virus throughout the cube. In 2376, the U.S.S. Voyager found the cube adrift in space, and was able to rescue Icheb and a few other assimilated children who were the only survivors aboard.