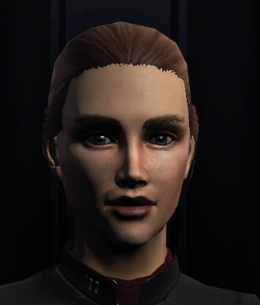 Lieutenant Commander Brocal is a Human Tactical officer and contact specialist. She can be found at the desk at the far end of Starbase 39.

Brocal previously served as second officer and contact specialist on U.S.S. Tucker under command of Captain S'trann for six years. He suggested Brocal transfer to Starbase 39-Sierra to get promoted.