Assimilation of a Starfleet installation by the Borg Collective

The Borg Collective is the term used to define the forced combined consciousness of trillions of individuals, using technology. The Borg are distinguished by their collective consciousness (often heard by a chorus of voices), their fusion of biological matter and technology, and their driving principle to assimilate all knowledge or eradicate threats, without regard to ethics.

The Borg are led by a figurehead, known as the Borg Queen. The Queen directs the actions of each Borg unit, and assigns priorities and tasks via subspace communications. No Borg drone or unit can function without being connected to the Collective, as witnessed in the kidnapping of Locutus shortly after the Battle of Wolf 359.

The Borg are also easily identified by their iconic vessels, whose basic shapes underscore their massive destructive potential. It's crew numbered up to 130,000 and on two occasions the Borg were confident enough to send just a single cube to assimilate Earth. On both occasions, the Cube was only narrowly defeated by Starfleet.

The first official contact between the Federation and the Collective came in 2365, although unofficial contacts and assimilations predate this. The Collective was severely weakened by the actions of the U.S.S. Voyager in 2378, however in 2409 the collective renew their assault on Alpha Quadrant powers at Vega. 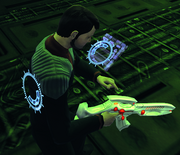 Remodulating an energy weapon can take precious seconds in combat

The Borg have some unique mechanics that make them a challenging foe for new players first encountering them. Note that most of these mechanics are not present during their inclusion in the Starfleet Tutorial, and most players will first encounter them in “Where Angels Fear to Tread”.

Drones adapt to energy weapons (i.e. Phasers or Disruptors) after a few shots, then you will no longer deal damage to them (this is signposted in hovering green text reading "Adapted"). To counter this you must either;

Borg can anchor you to a spot and if you try to move you will suffer Electrical Damage and be pulled back. Borg can also adapt to Crowd Control abilities.

Their Tractor Beams are only effective within 5km, so remain more than 5km away from the ship.

The Borg Shield Neutralizer is highly effective. It is difficult to prevent, but your abilities should include ways to regenerate shields (i.e. Reverse Shield Polarity, Emergency Power to Shields and Shields Batteries) and improve your hull (i.e. Damage resistance consoles).

The Borg use a transporter version of Boarding Party, but you can still clear them with Tactical Team and restore disabled systems with Engineering Team.

Borg Plasma Torpedoes deal Plasma Damage over Time, so even when you are no longer being hit by them, they will continue to damage you.

The group consciousness of the Borg civilization is created by linking each Borg drone to the collective by a sophisticated subspace network that ensures each member is given constant supervision and guidance. The collective is broadcast over a subspace domain similar to that utilized by transporter technology. Being part of the collective offers significant biomedical advantages to the individual drones. The mental energy of the group consciousness can help an injured or damaged drone heal or regenerate damaged body parts or technology. This is instrumental in the Borg ability to adapt with great speed to defensive tactics used against them. Increasingly, the Borg are utilizing cybernetic technology, replacing large parts of the original body in order to increase reaction time and intelligence. This has also led to the Borg being more willing to take aggressive action than ever before. Ever since the Collective learned about the Omega Particle they have developed an almost spiritual reverence of the molecule. They believe it to be an embodiment of the ultimate goal of the Borg; perfection itself.

Borg regenerate in alcoves until they are needed

The Collective is determined by the single imperative to perfect its life-form biologically and technologically, and to assimilate and incorporate knowledge to achieve perfection. The Borg Collective, in certain cases, creates a representative to speak for the Borg, as in the case of Locutus and Seven of Nine. These representatives retain some capacity for independent thought.