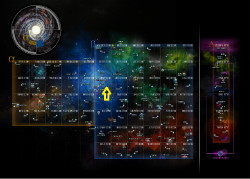 The Bhea System is a system located in the Vulcan Sector of the Beta Quadrant.

A large planet with a dense atmosphere comprised of carbon dioxide and argon. Bhea is notable for the large amount of fog and fierce storms that sweep over the land masses.

The planet was once a target for terraforming, but it was rejected due to the high level of radiation from the nearby B-class star.