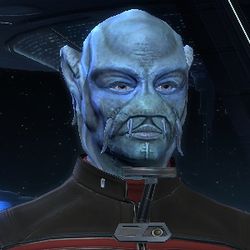 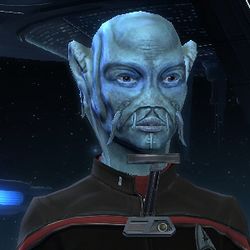 The Benzite symbol as a comm badge

The Benzite species are native to their home world of Benzar, and are part of the Federation. Benzites are a playable race in Star Trek Online on the Federation faction.

Benzites are a humanoid race and very distinguishable in appearance, having no hair, blue skin and tendrils around their mouth and nose area. Those from the same geostructure naturally look identical. Benzites were required to wear a piece of equipment to help them breathe in a nitrogen/oxygen environment, but no longer need it. In the game however players are still able to choose to wear this respiration device.

Benzites were very closed off with the Federation until the mid 24th century when a Benzite male joined Starfleet Academy. Benzites tend to be overconfident and eager to please, but very efficient.