Beam Arrays are directed energy starship weapons dealing damage to a single target (2 targets while Beams: Fire at Will is active) within a 250° base targeting arc (widens to 360° for Beam Arrays with [Arc] modifier). They deal the maximum damage when 2km or closer to the target, although they can still deal some damage that decreases with distance up to their maximum 10km range (distance damage penalty can be mitigated by improving captain's Long-Range Targeting Sensors skill). Beam Arrays can be mounted in both the fore and aft sections of a starship. Beam Arrays have a much wider targeting arc than Dual Beam Banks, but have a lower damage potential. Beam Arrays are standard space weapons, and all newly acquired starships come with at least one. 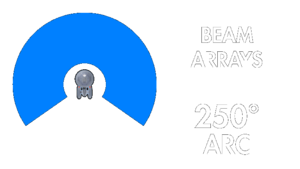 250° Targeting Arc for the Beam Array

There are several types of Beam Array available, each of which are listed below. Each type of Beam Array offers a different proc (random chance for an attack bonus). The damage done by these weapons is modified by several Modifiers, Skills from the skill tables and certain Consoles. The baseline damage is dependent on the weapon's Mark level and its rarity.

For more information on the base damage done by Beam Array weapons, see the respective weapon type articles.

Special Crafted Wide-Arc Modifier: This modifier is guaranteed to appear once only on specially crafted Mk XII Beam Array of Very Rare quality and higher:

Special Crafted Modifiers: These modifiers can appear once on crafted Beam Array of Rare quality and higher:

All values given are for Common Beam Array at 100 Weapon Power. There is greater damage with increasing rarity.