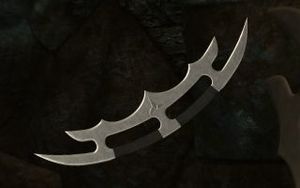 The bat'leth ("sword of honor") is an ancient Klingon two-handed melee weapon. The first bat'leth was said to be forged by Kahless in the 9th century by dropping a lock of his hair into the lava of the Kri'stak volcano, then plunged the burning lock into the Lake of Lusor and twisted it into the Sword of Kahless. It was with this weapon that he slew the tyrant Molor and pushed back the Fek'Ihri to Gre'thor. Today, the bat'leth is the preferred weapon of a Klingon warrior, with bat'leth tournaments have been held for generations, as it is preferred over disruptors; although some such as Worf prefer the mek'leth.

Bat'leths are melee weapons that have a variety of strikes when when used in a combination series. Melee weapons go straight through personal shields, directly attacking the target for 80% weapon damage. A variety of designs can be obtained, including some that deal additional energy damage such as plasma.

Common Bat'leths are purchasable through the vendors B'Eora in the Klingon First City, and Tok at Ganalda Space Station.

Uncommon, Rare and Very Rare are obtainable as random drops in ground missions and in the Mission: Coliseum.

“The Gates of Gre'thor”

This is bought from the Holiday Item Vendor during Q's Winter Wonderland. It only works against snowmen during the Winter activities and cannot be used in regular combat.

Formerly part of the Battle Group Omega vendors and was purchased through deprecated Marks of Valor. It is not currently available from the Omega Force Reputation System.

Note: Combo information is incomplete due to testing limitations.

There are seven factors that can affect personal weapons. These are Modifier suffixes, spent Player Skill Points, Personal Equipment, and Equipment Sets.