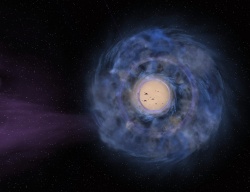 The Bajoran wormhole is an artificial wormhole created by the Prophets. It is a shortcut from the Alpha to the Gamma Quadrant, covering a distance of 70,000 light years. Federation space station Deep Space 9 is located at its entrance in the Alpha Quadrant, and both wormhole and station played pivotal roles in the Dominion War.

To spiritual Bajorans the wormhole is known as the Celestial Temple.

The home system of the Bajoran people. The system has eight planets, and there are four moons around Bajor, which is the homeworld.

The Bajorans are a deeply spiritual people, and faith in the Prophets drives much of who they are. They are also fighters, and when their world was occupied by the Cardassian Union they launched a fierce opposition movement that ultimately drove the Cardassians forces to retreat.

Bajor is one of the newest members of the United Federation of Planets.