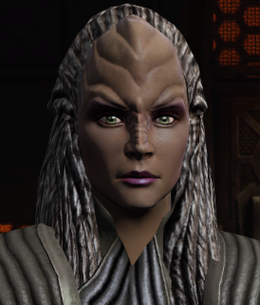 Research Lead B'Eler is a Klingon researcher stationed at Ganalda Station. She also serves as a member of House Pegh.

B'Eler's mother was a servant of the House of D'Ghor before it fell; she does not know or care who her father was. She served aboard the I.K.S. Azetbur for about one year, but disliked life on a warship, and disliked her commanding officer even more. It was during this time that she met K'men, who later helped her get her current position at Ganalda. Her role is to study captured weapons and technology on behalf of the Klingon Empire.

B'Eler was suspicious of K'men when she first met him, but has come to trust and respect him, along with the rest of Klingon Intelligence.