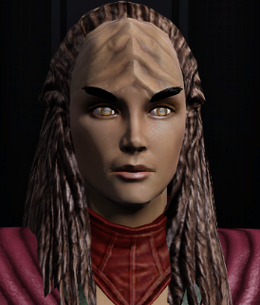 Loresinger B'Alea is a female Klingon located on Qo'noS near the entrance to the Great Hall at First City. B'Alea provides flavor text and Klingon history. Further information is provided by her father, Tiran, opposite her.


The Great Houses and their games dominate our Empire. Most among the Great Houses are descended from nobility, and some can even trace their lineage to Kahless himself.


Alliances of blood and blades, these organzations define the political state of Qo'noS. The most powerful Houses control fleets of their own, and without their support the government would fall.
House of Duras


The House of Duras is one of the oldest and most powerful in the Empire. It has alliances that stretch back for hundreds of years.

At one time, it was said that even Kahless himself owed homage to the House of Duras.

Ja'rod burns to restore his House's honor and glory. He is ambitious, but he may not be wise. His war with the House of Martok costs him much.


This may be the House of Duras' end ... or the start of its finest hour.
House of Martok


Martok was born a commoner, but with skill and honor he rose to greatness. Not even the stain of having been replaced for a time by a shapeshifter was enough to stop him.

When J'mpok slew Martok ... by the blood, that was a sad day for the Empire. We loresingers see history. And we saw great things in Martok. The path he could have led us on ....

Ah, but there's no reason to weep for spilled blood wine, is there?

The House of Martok is now led by Drax, son of Martok. Old General Worf acts as his gin'tak.

The House represents the new blood in the Empire -- those who want to take what is important from our traditions, but look forward to a glorious future for everyone in the Empire!

Funny how that new future is starting with a war.

When Drax's father was killed by J'mpok, Drex vowed vengeance.

J'mpok rules with an iron fist. Any who oppose him do so at their own peril.

He has had many years of experience as a politician, and with Ambassador B'vat at his side, he can sway the Council in almost any debate. And as a warrior, I hear tell that there is none who can match his skill with a bat'leth.

But as Kahless tells us, even the greatest may fall.

J'mpok's own House was small and weak. It has no lands and few allies. His alliance with the House of Duras was essential to his rise through the ranks of power.


Worf was once a Federation officer -- do you know that?

He served the Federation for years, even becoming ambassador to the Klingon Empire.

But he and Martok were great friends, and Worf was joined to his house. As Martok's fortunes rose, so did Worf's.

Worf walked a careful path between our Empire and the Federation until the treachery of the qa'meH quv -- the Undine -- was exposed.

It was the Undine who had caused the strife between us and the Gorn. The Empire invaded the Gorn homeworld to drive out these shapechangers, and Worf pleaded with the Federation to join us.

Their politicians refused, and condemned us for acting to defend the Alpha Quadrant. It was the end of our alliance.


Worf knew that the only honorable path was to fight the qa'meH quv. He broke his ties with the Federation. Now this is his only home.
Retrieved from "https://sto.gamepedia.com/index.php?title=B%27Alea&oldid=383380"
Categories: