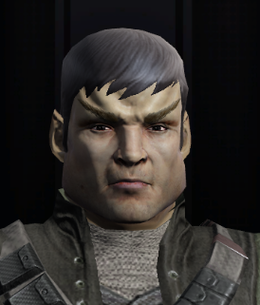 Subcommander Avran is a Romulan Republic officer at the Vastam Peaks of New Romulus.

Avran retired from the Romulan military after Sela began using the fleets for her personal revenge crusades, and the Tal Shiar launched a campaign to eliminate the Remans.

Avran later worked under Commander Tal'Mera for Republic Intelligence. His scout vessel was conducting reconnaissance in the Pheben System in preparations for an attack on a Tal Shiar convoy which was carrying supplies deemed vital to the Romulan Republic. However, Avran's ship was discovered, and he was captured by the Tal Shiar. At some point, however, Avran appearently either escaped or was rescued and made his way to New Romulus.

Avran is a believer in mnhei'sahe - the concept of a ruling passion that defines Romulans, and transcends petty revenge or pointless obedience. He is happy working on New Romulus, and prefers to think that his family would have been pleased with what the Romulan Republic is accomplishing on the planet.